With an area of 1,648,000 square kilometers, Iran is among twenty biggest countries in the world. Iran is located in southwestern Asia, and shares its entire northern border with the former Soviet Union states. This border extends for more then 2,000 kilometers, including nearly 650 kilometers of water along the southern shore of the Caspian Sea. Iran’s western borders are with Turkey in the north and Iraq in the south. In the east lie Afghanistan on the north and Pakistan on the south. To the south, a long coastline borders the Persian Gulf and Oman Sea.

Iran consists of rugged, mountainous rims surrounding high interior basins. The main mountain chain is the Zagros Mountains, exceeding from northwest to southeast. The center of Iran consists of several closed basins that collectively are referred to as the Central Plateau. The eastern part of the plateau is covered by two salt deserts, the Dasht-e Kavīr and the Dasht-e Lūt. Tehrān, the capital, is the country’s largest and most populated city. Iran’s other major cities include Mash’had, Esfehān, Tabrīz, and Shīrāz, all of which had populations of 800,000 or more in 1986. The official language of Iran is Persian (the Persian term for which is Farsi). Iran is divided into thirty provinces each with plenty historical and natural attractions. 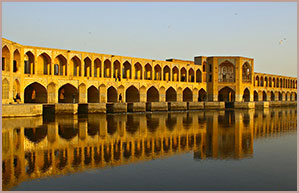 Isfahan extends over an area of approximately 15263 square kilometers. Isfahan lies at an altitude of 1570 meters above sea level. It has a population of nearly 1,600,000. The city of Isfahan embodies the districts of Koohpaye, Meimeh, Jarghooyeh and Borkhar. 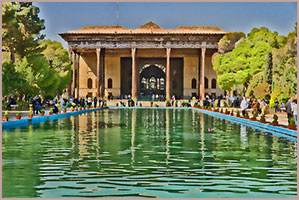 Isfahan has a semiarid and temperate climate, with four seasons occurring regularly during the year. The unique location of Isfahan (i.e. in the central Iranian plateau), its distinctive natural features (e.g. high snow-covered mountains and fertile plains), and its climatic variety have all contributed to Isfahan turning into a center of settlement since ancient periods.

Therefore, Isfahan is thought to have been among the locations where ancient civilizations developed, and Iranian culture and commerce evolved. 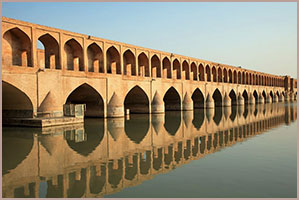 Isfahan is located at the conjunction of roads linking north and south of the country, thus it enjoys an exceptional position. In the past, the city of Isfahan served as a bridge connecting Asia and Europe. It was part of the commercial route whereby goods were carried to different parts of the world.

The highlands around Isfahan Include Mount Pila (Seyyed Mohammad) northwest of Atashgah (The fire temple), Mount Donbeh west of the city, Mount Kollah Ghazi, Mount shahkooh and Mount Sofeh to the south, and the hills of Abshar and Shahrestan to the east. 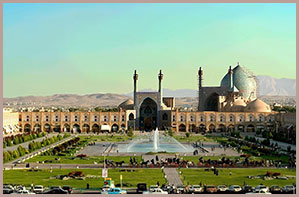 There have been no major earthquakes, floods or fatal lightings in the area, hence contributing to Isfahan turning into a metropolis around which numerous villages have taken shape.

The strategic location of Isfahan, in terms of military defense has also furnished the city with enormous advantage during history. Cities in the past formed in places, which enjoyed defensive advantage over other areas. Such was the location of Isfahan in ancient times. 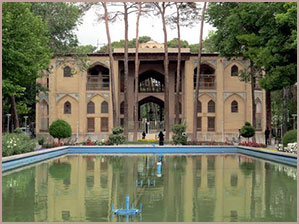 This is affirmed by numerous fortresses built around the city, namely Atashgah (The fire Temple), Tabark and Sarooyeh and remnants of fortifications around the city dating from different periods.

According to most historians and researchers, Zayandehrood River, which runs across Isfahan, has contributed hugely to the progress and development of this city. The river is of so much significance that the name of Isfahan has always been accompanied by that of Zayanderood River. This is the most important river flowing in the central Iranian plateau. 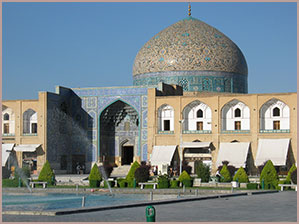 It originates from the highlands of Zardkooh Bakhtiari and a mountain range called Koohrang. Zayanderood River runs from east to west before terminating in the Gavkhooni lagoon.

Most researchers believe Zayanderood River has changed course many times in different geological periods, leaving sediments in Isfahan. Some ancient writers such as the author of Al Alagh Alnafiseh (10th century A.D.) have referred to this river as ‘Zarinrood’. 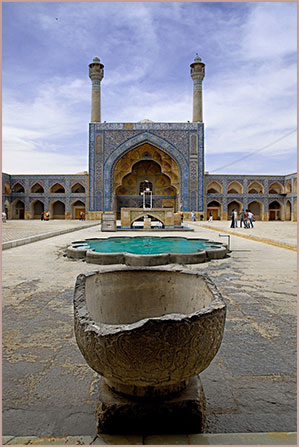 Ebn Hooghal Baghdadi, the author of Sooratolarz and Hamze Isfahani renowned geographer and historian has called the river “Zarnrood’. By referring to different old and new sources, and pondering upon the works of writers, historians and researchers alike, one finds out that Zayanderood has always enjoyed great importance throughout the history of Isfahan.

Further studies indicate that many beautiful castles and palaces were built along Zayanderood.

Handicrafts constitute a tradition perpetuated by human hands, because they are partially or wholly, made by hand. A nation’s handicrafts are shaped by its philosophy and express its artistic inclinations.

Handicrafts of every nation mirror the artistic taste of their forefathers and founders, and represent an incarnation of human talent and creativity. Toward the end of the seventh century A.D. Iranians embraced Islam. At this time, Iranians’ artistic essence merged with Islamic values, yielding yet richer and more genuine works of art.

The wheel and the spool are said to be the oldest samples of items crafted by human hands, which is tantamount to saying that the human hand is the founder of all handicrafts. 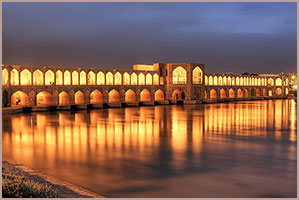 Profoundly influenced by the Islamic culture, Iranian arts and crafts, entered a new stage of evolution, and blossomed even further, especially in the field of architecture.

Renowned researchers, like Professor Pope, Girshman, and Schmide have provided detailed and analytical accounts of Iranian handicrafts. Today, Iran enjoys global reputation as one of the major producers and exporters of handmade works of art.

Shiraz is one of Iran’s five largest cities located in Fars province. The cisty is at an altitude of 1486 meter above the sea level and enjoys a temperate climate. 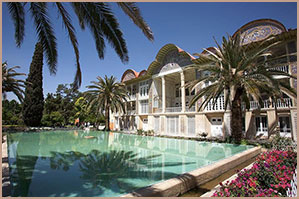 (Persian: باغ ارم‎ “Bāgh of Eram”) is a historic Persian garden in Shiraz, Iran. Eram is the Persianized version of the Arabic word “Iram” meaning heaven in the Muslim’s book of Koran.[citation needed] Eram Garden therefore is so called for its beauties and aesthetic attractions resembling “heaven.” The garden, and theQavam House within it, are located on the northern shore of the Khoshk river in the Fars province. 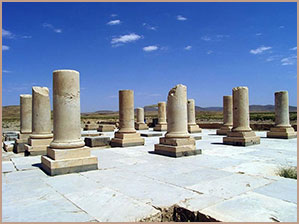 (Persian: پاسارگاد‎ Pāsārgād), the capital of Cyrus the Great (559–530 BC) and also his last resting place, was a city in ancient Persia, and is today anarchaeological site and one of Iran’s UNESCO World Heritage Sites.

The oldest relief at Naqsh-i Rustam is severely damaged and dates to c. 1000 BC. It depicts a faint image of a man with unusual head-gear and is thought to be Elamite in origin. The depiction is part of a larger mural, most of which was removed at the command of Bahram II. The man with the unusual cap gives the site its name, Naqsh-e Rostam, “Picture of Rostam”, because the relief was locally believed to be a depiction of the mythical hero Rostam. 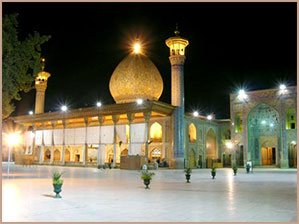 (Persian: شاه چراغ‎) is a funerary monument and mosque in Shiraz, Iran, housing the tomb of the brothers Ahmad and Muhammad, sons of Mūsā al-Kādhim and brothers of ‘Alī ar-Ridhā. The two took refuge in the city during the Abbasid persecution of Shia Muslims.

The Arg of Karim Khan (Persian: ارگ کريمخاني‎) is a citadel located in the north-east of Shiraz, southern Iran. It was built as part of a complex during the Zand dynasty and is named after Karim Khan, and served as his living quarters. In shape it resembles a medieval fortress.

At times, the citadel was used as a prison. Today, it is a museum operated by Iran’s Cultural Heritage Organization. 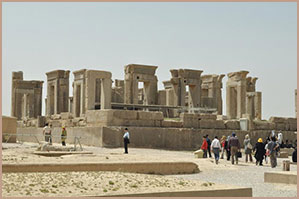 Persepolis was the ceremonial capital of the Achaemenid Empire (ca. 550–330 BCE). Persepolis is situated 70 km northeast of the modern city of Shiraz in the Fars Province of modern Iran. The earliest remains of Persepolis date from around 515 BCE. UNESCO declared the citadel of Persepolis a World Heritage Site in 1979.[1] To the ancient Persians, the city was known as Pārsa (“The City of Persians”).*[2] The English word Persepolis is derived from the Greek Πέρσης πόλις Pérsēs pólis (“Persian city”). In contemporary Persian, the site is known as تخت جمشید Takht-e Jamshid (“The Throne of Jamshid”), and چهل منار Chehel minar(“The Forty Columns/Minarets”). 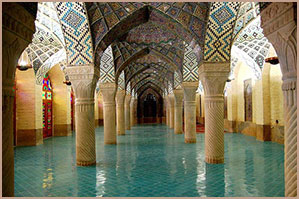 The Nasīr al-Mulk Mosque (Persian: مسجد نصیر الملك‎ – Masjed-e Naseer ol Molk) is a traditional mosque in Shiraz, Iran, located in Goade-e-Araban place (near the famous Shah Cheragh mosque). The mosque was built during the Qājār era, and is still in use under protection by Nasir al Mulk’s Endowment Foundation. It was built by the order of Mirza Hasan Ali Nasir al Molk, one of the lords of the Qajar Dynasty, in 1876 and was finished in 1888. The designers were Muhammad Hasan-e-Memar and Muhammad Reza Kashi Paz-e-Shirazi.

The mosque extensively uses colored glass in its facade, and displays other traditional elements such as panj kāseh- 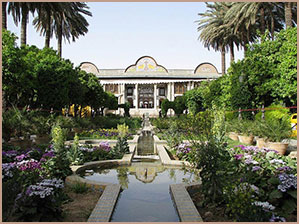 Qavam House (also widely called “Narenjestan e Ghavam”) is a traditional and historical house in Shiraz, Iran. It is set within the Persian gardens of Eram Garden.

It was built between 1879 and 1886[1] by Mirza Ibrahim Khan. The Qavam family were merchants originally from Qazvin. But they soon became active in the government during the Zand dynasty, followed by the Qajar, and Pahlavi dynasty as well.

The Qavam “Naranjestan” preserves the elegance and refinement enjoyed by the upper-class families during the 19th century. The paintings on the low ceilings of the house are inspired by Victorian era Europe.

The mirrored porch was a focal point of the house, overlooking the Eram Garden that was designed with fountains, date palms, and flowering plants.

During the second Pahlavi era, the House became the headquarters of Pahlavi University’s “Asia Institute”, directed by Arthur Upham Pope and Richard Nelson Frye. Frye and his family also lived in the house for a while.

The house today is a museum and is opened to the public. The house and the Eram Garden are within the Shiraz Botanical Garden. 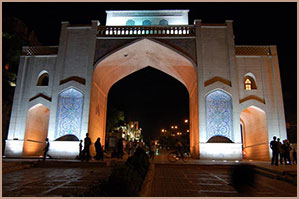 It is located at the northeastern entrance of the city, on the way to Marvdasht and Isfahan, between Baba Kouhi and Chehel Maqam Mountains near Allah-O-Akbar Gorge. 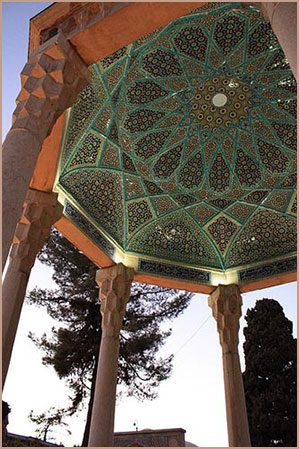 The Tomb of Hafez and its associated memorial hall, the Hāfezieh, are two memorial structures erected in the northern edge of Shiraz, Iran, in memory of the celebrated Persian poet Hafez. The open pavilion structures are situated in the Musalla Gardens on the north bank of a seasonal river and house the marble tomb of Hafez. The present buildings, built in 1935 and designed by the French architect and archaeologist André Godard, are at the site of previous structures, the most well-known of which was built in 1773. The tomb, its gardens, and the surrounding memorials to other great figures are a focus of tourism in Shiraz.